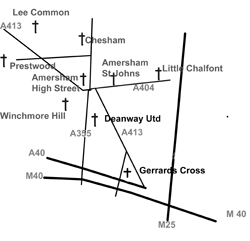 The Amersham Methodist Circuit in its present form came into being in 2006. The Methodist Church created the London District, the Amersham Circuit became a part of the Northampton District and had Gerrards Cross added to its existing churches.

The Amersham Circuit lies within the Chilterns, an area of outstanding natural beauty in Buckinghamshire.

Our six churches, some of which are small village churches, are located in and around Amersham. They can be found in Old Amersham, Chesham, Gerrards Cross, Little Chalfont, Prestwood, and Deanway United Reformed Church in Chalfont St. Giles (in partnership with the U.R.C).

Our Circuit has been part of the Northampton District since 2006, when the Methodist Districts were rearranged and Gerrards Cross Methodist Church joined our Circuit.

Within the Circuit each church has its own forms of worship and outreach. The Circuit churches work together to raise money for our Circuit project supporting a different charity every two years.

Our Circuit seeks to make the love of God known and to share the Good News of the Gospel through the worship, witness and work of our churches. It exists to support all its churches in their efforts to reach out to those in their communities.